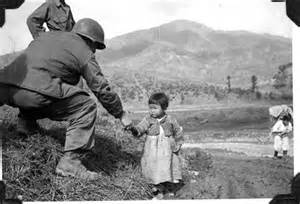 We did it again in the 1950s–unselfishly secured freedom and democracy in a land not our own. And no other government of the world has ever shown appreciation and  honor to the American Army, Marines, Navy and Air force as the South Korean people have to those Americans who served in the Korean War.

Since 1975, the Korea Veterans Association – Seoul (KVA) has hosted Korean War Veterans and their families through the “KWVA Revisit Program” by providing free hotel accommodations, bus tours of Seoul, Inchon and the DMZ, and all meals in Korea.

Many memorials have been built in the world to honor American forces—the living and dead—who fought in Korea. The list of memorials goes on and on.  And the South Korean Government has spent millions of dollars to photograph every Korean Memorial in  every country of the world including ours at Fifth Street and Highway47 in Washington, Missouri.   These photos are published in a three-volume set and can also be seen at www.kwva.org/memorials.

The appreciation of the South Korean government is best expressed by inscription on the Korean War Memorial in Washington, D.C.: “Our nation honors her sons and daughters who answered the call to defend a country they never knew and a people they never met.”